They say, old home appliances are legendary for their durability. Or is it a myth? The word is that the new appliances are prone to damage and don’t even begin to compare with their predecessors. Is this true? Let’s see. Some of the things we hear and read have a point, and some have a reason for being true. What should we do? Bring justice on the table. How? Let’s examine the advantages of old appliances but also the advantages of the new ones to draw our own conclusions.

The advantage of old home appliances

•   Durability: old refrigerators, microwaves and washers lasted for so many years that people actually wanted them to break down just to get new ones. Back in the day, appliances were extremely durable. They worked for over a decade and then passed down to relatives who also used them for another 15-20 years.

In contrast to the old appliances, which could take the beating, the new ones are fragile. New appliances that serve for approximately 15 years are considered long-lasting whereas such a longevity was considered a norm a few decades ago. Simply put, new appliances do not have the strengths their predecessors had. They break down easier, there’s a need for appliance repair often, and must be replaced soon. That’s the downside of modern appliances.

•   Amazing designs: the big boom for the appliance design was in the 1960s. Whirlpool, Frigidaire, and other big appliance brands weren’t intimidated by color. It’s no surprise that the retro appliance style is back in fashion lately. The boring white appliances and the indifferent stainless-steel hue weren’t satisfactory even to the advocates of minimalism. They are easy to forget and have no character as opposed to the intense yellows, reds, and pinks of the mid-century appliances.

The advantage of new home appliances

So far, we have established that the new home appliances are hardly durable and long-lasting, and they also lack in aesthetics when compared with their mid-century counterparts. So, what’s left to make them stand out, you may wonder! Time to do modern appliances some justice.

•   Energy efficiency: sustainability is a big issue today. Over the last decades, people try to find ways to produce items that won’t affect the environment in a bad way. It’s no wonder that energy star certified appliances started dominating the market. In fact, the A energy label which dominated a few years ago hardly exists today, since most appliances are labeled A+, A++, and A+++. 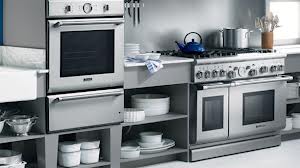 That’s a great advantage of modern appliances over their old counterparts. They may not last as long as the old appliances, but they help you save money. With a triple A labeled fridge, you can save about $100 per years on energy.

•   Water saving: appliances that use water to work (like dishwashers and washers) were a main concern back in the day. They untied the hands of the homeowners but the water waste was also considerable. Today, things are different. As a matter of fact, by using the dishwasher instead of hand-washing the dishes, you save lots of water. Due to the ancient technology, the old appliances used double the amount of water modern appliances need today.

We witnessed the battle; let’s see the winner

Today, we have more options among appliances. There are plenty of brands and each brand keeps making new models. Although the latest designs are more interesting and colorful than the appliance styles a few years ago, they still don’t beat the beauty of the appliances in the ‘60s. And they certainly don’t begin to compare with the durability and longevity of the old appliances.

In defense of the new appliances, they save us a lot of money otherwise spent on energy bills & water consumption. And it really makes sense to say that manufacturers would have to raise their prices if they’d make energy efficient appliances that are also durable.

So, let’s accept the good things we have. In the old days, you could kick your washer without worrying about damage. Now, you are afraid to move it around in fear of getting it ruined – a far stretched assumption to make a point. But you save on energy and also save the planet. Aren’t these two good reasons for giving the thumbs up for modern appliances?